On the path towards a climate-friendly future

We are convinced that a climate-conscious production and a sustainable variety of products are possible and worth striving for. We have been sourcing 100% of our electricity from renewable energy sources for over 10 years now, we have dramatically reduced our energy consumption, and we have entered into a project partnership with the myclimate climate foundation. With BULB B1.GREEN and BULB Flow, we now have two CO2-neutral products in our product range, and the sale of reusable bottles should reduce the number of single-use plastic items in circulation. The latest step in our commitment is to become a member of the swisscleantech business association. The aim of the association is to make Switzerland CO2-neutral by 2050. We are also on board and we look forward to being part of the solution!

Looking after the environment – today and tomorrow. Sustainability at Innique.

At Innique, we’re passionate about using resources efficiently and proactively doing our bit for the environment. You can see this attitude reflected in our products too. Our high-quality reusable drinking bottles are extremely long-lasting. Each reusable bottle saves on hundreds of disposable bottles, significantly reducing the impact on the environment. And at the end of their lifespan, our reusable bottles can be put into normal plastic recycling.

Over the past few years, we’ve taken a number of steps to improve our carbon footprint:

Despite everything we’ve already done, we don’t rest on our laurels and are constantly looking for more things we can improve. At the moment, we’re evaluating the use of bioplastics made from renewable resources. Our first bioplastic product will be a version of our B1 drinking bottle made using plastic derived from sugar cane. With our wide-ranging innovations, we’re helping to ensure we leave behind a liveable environment for future generations.

Sixty years of quality and innovation: the maker of BULB BOTTLES celebrates its anniversary

We’re celebrating our sixtieth anniversary this year. When the company was founded in 1957, few could have thought that a firm set up in a little garage would one day become a pioneer in the production of drinking bottles. Back then they mainly produced tubes and pipes using an extrusion process. But the first Swiss plastic hula-hoops were manufactured in Oetwil am See, as were the plastic-covered steel pipes which helped the ‘Stewi Wäscheschirm’ washing stand and its eponymous company finally achieve a breakthrough. In the early 1980s, extrusion blow moulding technology was used to produce the first drinking bottles, laying the foundation for a new business segment. The company moved to Grüningen in 1996, were there was enough space for it to continue to grow.

The BULB brand was launched in 2008, and Jkaplast AG became Innique AG in 2014. But not everything changed: the company is still manufacturing its goods in Switzerland using its years of experience, at the utmost quality and as reliably as ever before. Today we mainly produce drinking bottles: five BULB models in 20 standard colours and a range of customised bottles. Then there are lunch boxes and custom bottles and hollow parts for food and technical uses.

The innovation continues: using our user-friendly online configurator with its design function, you can now design your own drinking bottles easily, quickly and conveniently. Curious? Go straight to the configurator take a look. 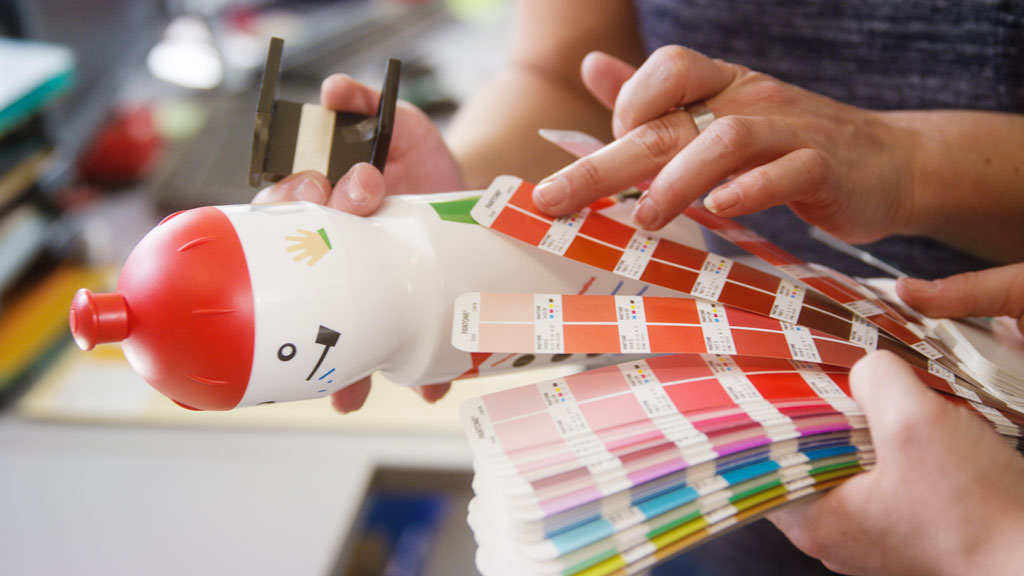 Now you can design your own BULB bottles

Bottle, lid, colours, image and text: now you can easily and comfortably design your own BULB bottle right on your screen!

Simply choose your bottle type, select the colour of the bottle and the lid, place your image and/or logo, and enter your text. Voilà! Just like that, your own BULB bottle is ready and can be admired in a 360-degree view!

You can also share your self-made bottle with all decision-makers and opinion leaders, as well as request a non-binding offer.